What is Floatation? My experience.

It was nice to go and try some new rejuvenation experience with my boyfriend.

We both didn’t find any negative points about the experience. Floating and massage are two totally different experiences. However they are both relaxing in the end and lets your muscles feel better. However we both agreed that spending money on the massage is a better idea. Because you actually get your muscles worked out, lengthened, manipulated and stretched. Where in the float is more so just giving them a brake from the earths hustle and bustle activities and gravity. Anyhow this could be a nice change once in a while to do to help our body’s and minds function better. Being a massage therapist I did feel, that it has relaxed some of my tense neck and back muscles. And my mood was better after it.

As well I did some stretching while inside the zero gravity tank, which was nice. My legs and arms felt super heavy when I took them out of the salt solution.

I think that being able to not to carry your body weight in itself is what is relaxing the most. I could feel my head being a little heavy and some pain in my neck. Which I think it was a reaction from neck muscles relaxing and trying not to hold my head as it was floating. We did get a suggestion to use a floated to support the head. But I found it it wasn’t necessary and a more authentic unique experience.

The water in the tank was nor cold nor warm.

The owner explained that it was the skins temperature which is about 94 F degrees. The tank however had an option for it to be warmer by a touch on a button inside of it. I didn’t really feel cold in it, however I tried to warm it up a little bit. It felt a little more humid and nice warm but not too warm.

Wearing googles at the tank is recommended because of the salt solution in it. If it gets into your eyes it would sting. As well if you have any scrapes or wounds it is not recommended to go into salt tank.

What fascinated me the most I was able to really get in touch with my body and hear my heartbeat.

There was couple of times where I felt a little uneasy and felt like I wished it was over, but than my mind wondered away from it and it felt good again. I think it is just because I have a nature where I get bored easily and it is hard for me just to be still and do nothing.

Me and my boyfriend have visited a tank in one of the tanks in Vermont, which is located in Satori spa in Shelburne.

It is a different and an interesting way to relax, what do you think?

This is a video on floatation.

“An isolation tank, originally called a sensory deprivation tank (a.k.a. float tank, flotation tank or sensory attenuation tank) is a lightless, soundproof tank with high epsom salt (magnesium sulphate) content filled with salt water at skin temperature. In which individuals float. They were first used in 1954 to test the effects of sensory deprivation.

Flotation has been widely advertised on the internet as a form of alternative medicine that has a number of health benefits, but the claims are often exaggerated and poorly-evidenced.[1] Despite the lack of scientific support, people have sought treatment from flotation for many conditions. Including muscle tension, chronic pain, hypertension, and rheumatoid arthritis to PMS.[6]

A 2005 meta-analysis of clinical trials that had been conducted at that time, found that the trials were generally small and highly prone to error. But given that limitation, use of isolation tanks, (called “flotation REST” or “restricted environmental stimulation therapy” in the literature) appeared to be useful for stress management.[7]” 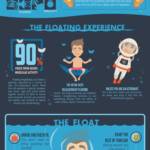