HomeBlogBlogs on SkinEsthetician Reacts to Bella Thorne’s...
April 27, 2020 Posted by Jolita Brilliant in Blogs on Skin 1066

I have to say that there are A LOT of scaremongering skincare claims being made by some people. I’ve struggled with acne as a young adult to then dealing with hyperpigmentation issues in my 20’s and 30’s now preventing and fighting off those pesky fine lines and wrinkles.

Moral of a story: Natural in not always better.

I came across an excellent article about preservatives used in skincare from licensed Esthetician Rita Lee, who also has a Biochemistry and Molecular Biology undergraduate degree as well as an MBA from Harvard.

“I recently had to throw away a well known brand of micellar water purchased in France, found in ‘pharmacies’ (high end drugstores) and large budget chain stores. Mine was from Monoprix, which is equivalent to our Target. I bought this in 2010. And yes, I (sheepishly) admit keeping it for that long!

Cleansers are generally the type of product that keep well (long shelf life). Micellar waters even more, because it’s mostly made of water. Hence, why I kept them for so long. Ah! But there’s the catch. This micellar water was for the eyes – the kind that can remove waterproof eye makeup. I forgot about that because most of my micellar water from France is for the face. Eye micellar waters are made of two phases. Inside the bottle are two liquid layers, separated by a visible border in the middle. These two layers are clearly separated. They may be different colors. One layer is aqueous (water-based). The other layer is oil-based. This is a DUAL PHASE system. Before you apply the micellar water, you need to shake the bottle vigorously to break up and mix the two phases into one solution (one color, no separation). It’s like shaking a bottle of oil and vinegar to make salad dressing. After you are done, this solution quickly separates into two phases again.

A colony of bacteria decided to invade and make my precious “I brought you all the way from France” bottle its new home. You want to guess which phase it decided to set up camp? The oil phase! Why this part and not the other phase? Because anything fatty is an attractive food source, not to mention vulnerable to oxidation. Always remember that. Fatty ingredients go rancid more quickly, oxidize more quickly, and attract more organisms, big and small. When I first noticed it, the bacteria appeared as a very tiny ball near the border of the two phases. It was barely visible. A few days later, it was slightly bigger. A week later, it was bigger still, now a small blob. And yet, I didn’t throw it out just yet.

And sure enough, my new visitors gave it to me. The bacteria decided to form an ENORMOUS BLOOM inside this oil layer. An indisputable colony in the form of a humongous, gray cloudy blob that took up half the space of the top layer (the oil phase). When I looked at it two weeks later, my immediate reaction was revulsion. YUCK! GROSS! Out you go! And not down my drains either! It disgusted me so much, I ran outside and dumped it into the grass, which I regret now. Only because I should’ve taken a picture of it to show you. A picture is worth a thousand words, and that photo would be far more persuasive than this article. But how about a loaf of moldy bread to fill in?

So what happened? I had only used the bottle a few times after it was opened before the bacteria appeared. Most likely, the preservative system broke down, which happens over time. No preservative system lasts indefinitely. All mixtures break down eventually. Skincare ingredients lose their efficacy. AND…something contaminated the liquid bottle. I must’ve double-dipped. I probably put my soiled cotton pad (with the makeup from my eyes) back onto the lip of the bottle to get more cleanser onto the pad. BIG NO NO! It’s an easy mistake to make, especially if you are in a hurry or distracted. And so another lesson is – DO NOT DOUBLE DIP YOUR SKINCARE, JUST AS YOU DON’T DOUBLE DIP AT PARTIES! A soiled cotton pad (or finger) will easily contaminate the interior of the bottle (especially if you’re shaking it a lot).

Millions of bacteria and other critters (microorganisms) live on our skin. Most of it is good for us (they protect us). But not so nice for skincare products. Preservatives are a no-brainer to me. Of course we need them. Unless you plan on making your own skincare every 3 days, your skincare products need preservatives to keep the bugs out.”

This is where parabens and preservatives come into play. They keep the bugs out and extend the shelf life of a product. Without preservatives, products would spoil faster and become contaminated by harmful bacteria, mold, yeast, other fungi and microbes, especially in the moist, warm environment of a bathroom. Parabens stop this growth. The same percentage used in skincare and cosmetics is equal to the same amount in blueberries. We still eat blueberries…

They are not toxic or carcinogenic to humans. They are perfectly safe for use in skincare and cosmetic products, and this is supported by a lot data and studies to back parabens up. How would you feel if you opened up a jar of moisturizing cream and found little bugs crawling around in the jar? Would you want to rub it all over your face? Probably not! 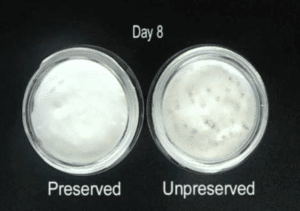